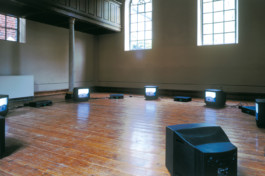 Audio video installation in the former synagogue in Drensteinfurt 2000

Seven monitors and players sit on the floor in a circle linked together into a chain. The screens face into the middle of the circle. The same video image on all the screens shows half of an out-of-focus, life size face on the bottom edge of the screen. The other half, which is missing, can only be imagined as it has dropped off the screen into the floor. A reclining half-head is represented – in contrast to › Constantin Brancusi’s complete reclining head.› The video image appears stationary but, when closely observed, it is moving slightly.

The half-face rises and falls with calm, steady breathing. In its abstraction, the monitor image works like the image of a landscape: a dark mountain is seen against a bright blue sky, with a gently undulating horizontal line. Video technology was used to slow the image down, so that the points of the image in the foreground seem to swirl around like tiny, living worms. In seven steps a melodious, seven-sided murmuring moves round, a gentle song from soft to loud, and back to silence, from soft to loud and so on. 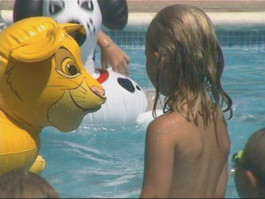