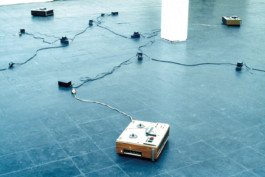 Five different endless tapes run on five tape recorders. The loops contain not only serial but also dramatic segments of predominantly cheerful south German folk music – such as is heard at beer and wine festivals, music that invites you to dance, sing, link arms and celebrate. Tape loop playback is abruptly interrupted and re-started by the interval switches which are pre-programmed to the individual tape recorders. Unsynchronised playing times, random simultaneous occurrences and pauses result in a continuous repetition of the same thing, an atmospheric, ever-changing sound stage, at the same time both interrupting and being interrupted. 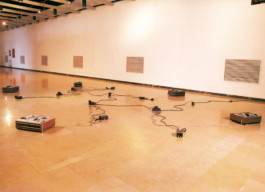