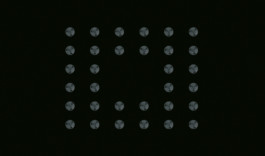 Those who cannot see must listen. Trance machine consists of a rectangular field of 32 circles resembling tape reels and rotating clockwise. Each reel contains the fragment of a sentence. When the user clicks a tape reel, the fragment of a sentence becomes audible, then slowly fades away. Once called up, the fragment of one sentence allocates itself to other fragments in the fashion of a memory game. Four fragments at a time add up to one ‘Sinnsatz‘, or unit of sense. The sentences are the reflections a fictional person makes about herself. For instance, they read ‘I had great power of imagination, much too much to be satisfied with mere reality’, or ‘Sleep was part of my work’.

The inner dialogue remains hidden behind a field of 32 identical rotating tapes, which to look at resemble a screen saver. By clicking on individual tapes, fragments of sentences become audible. The serene female voice with its foreign accent speaks calmly of a life which is apparently over. While the acoustic background information becomes audible by clicking, the scattered fragments of sentences, spread out randomly as at the beginning of a memory game, form themselves simultaneously into complete sentences. Simply by playing, by being curious and by listening, users always take the Trance Machine out of its original, dis-ordered state into a state of order, one which, however, is calculated by the computer. The minimisation of visual stimulation in favour of serial uniformity serves to create trance as a state of concentration, openness and confrontation. The image of rotating tapes, which is optically not especially informative, should force itself directly into the users’ world of thought. Trance Machine is to that extent an explicit attempt at suggestive manipulation. The intimate opening up of personal knowledge results in a feeling of human closeness to a person opposite, a feeling which vanishes at once in the distance of a voice which lacks both an image and a physical presence. It is this ambivalence of proximity and distance which interests me, or, to put it another way: working in the intermediate space.

‘Trance is a very ancient method of gaining distance from oneself, of departing from ingrained habits of thought, conditioned patterns of meaning, for putting them into perspective and making new ones possible.’ 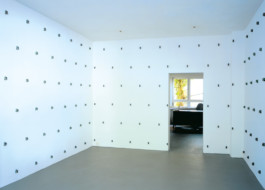